After the lackluster of activity in response to, "Updraftia: Silver and Gold" voice auditions round 1, we are laying out various pitches to interact with possible fans of the studio on how possible content will be received. A complete list of pitches can be found here: List of Pitches. You, the fans of the studio are the studio executives and we are pitching various projects which you will vote on once a fair number have accumulated. All of the projects will have an original script even if the universe is from another story (e.g. no animated adaptations of novels or comic books).

Fanonmation is a term for non-canon animation. It is a good idea for a startup hobbyist studio since it will have transfer fans from canon. The disadvantage is it cannot generate revenue for the studio through sponsorship and paid content due to intellectual copyright laws. Keep in mind just because the first project is fanonmation doesn't mean the following projects cannot be original. The goal of the fanonmation would be to generate fans of the studio.

Nexo Knights ended airing in 2017 and since then, no generally received as canon story has been released. While this means a smaller fan base, it also means the canon universe is no longer expanding and causing possible conflict with the possible project.

I am a fan of Nexo Knights, what does this mean for me?

You as a fan

There are multiple things this means for you as a fan of Nexo Knights. Firstly and most obviously, it means additional content after multiple years of the story having closed. Secondly, it will provide you with an opportunity to discuss the new content as well as the production of the new content with other fans. Lastly, you will be able to take part in content production. I know what you are thinking. It is, "I don't have experience as a cg artist." If this is the case there are other areas of production in which you can assist. These are: Voice acting, musical score, creative team, storyboarding, team management, production schedule management, asset library management, and concept art. Concept art needs to be made for: character body proportions, character faces, clothing, hairstyle, buildings, props, etc. About a third of all work done is not cg work. If you are interested in joining the team, a team recruitment drive will begin once a pitch is approved.

The project takes place after Nexo Knights Season Four as it is the logical extension of the canon universe. It will feature the regular ensemble of characters. The plot is undecided, which gives much liberty for you to join the creative team and add your own ideas. Note: you must contribute more than just to writing to get to write.

"LEGO: Nexo Knights," in canon, is lego minifigure cgi animated. The proposed art style for the production will go with a more photo-realistic style. This will be done in order to achieve certain artistic goals. Throughout the art section you will see various example that the human based cg meshes will allow. The characters will be made in Reallusion's Character Creator. This is a slider based character generator. It allows for rapid and unique production of characters to populate locations so there aren't the same people in every town.

This is what this style looks like from another project

If done correctly, this style can be more pleasing than the cg Legos.

An example of fantasy armor from Marvel

An example of cyber punk from Deviant:

Civilian tunics will be old style form but with modern functions. Princess dresses are another attire item yet to be conceptionalized. Civilian attire, wizard robes, and royal clothing will be based off instances from the show.

It isn't Nexo Knigths without monsters. The photorealistic style will be grittier than the television series. The monsters will be grotesque and haunting, as monsters should be. Monsters will be based on horror, action, and fantasy portrayal.

The project will provide the opportunity to use artistically rewarding robot designs for various squirebots.

Hair will be strand rendered. While this does slow render time, its effect is relatively minimal and that slowness is not as consequential for a single edition feature than a serialized production.

Based on viewing of the television series, the items people own in the series are modern, not future, not past. This means time/ budget friendly production as there are many free 3d models of modern things on the web with the correct intellectual property rights.

The basic formalu for the weapons is to combine fantasy ecentric design elements with cyber punk materials and glowing.

This is what a fantasy sword looks like. Notice its disposition from how period swords looked with its superfluous design elements. If glowing were added down the center it would work as a Nexo sword.

Vehicles in the television series are generally wheel based, with the exception of jets, mech-dragons, and carraiges. Designs of the vehicles will be canonically based with a photo-realistic understanding. Vehicles such as mechs and mech-dragons have the most potential, save the Fortrex.

The main mobile fort of the heroes will be the most anticipated vehicle. Unlike the show, it will be just as large outside as inside, which for us, is a medium sized castle. The roads will be widened for this vehicle I am certain is the least environmentally responsible former RV ever. Its arcuitecture will be based on medieval forts but it will be made out of sci-fi metal and include sci-fi detailing and lights.

A candidate castle for the fortrex. It has the general idea of the size and canon features.

A typical sci-fi construction and coloring from Turbo Squid user:

Knightonia is the capital of the Nexo Knights' world. Luckily for us in canon it is a small capital. Its city-layout will be based on canon. Its architecture will be based off European castles with futuristic lighting. It will be made of stone to reflect its long history. The color pallette will also be expanded from just blue to different colors for different scenes in accordance to color theory.

The basic formula for a town in Nexo Knights is repeat houses, a tower in the center, and a food cart. Although the feature is not serialized the same formula and town layout will be used. The houses will be made in the typical medieval fantasy tudor style but with modern materials. The house will then be repeated in the layout for the given town being emulated.

What could be considered a typical medieval fantasy house.

The nature scenes will be more vast than in the television series. This is time and budget possible. 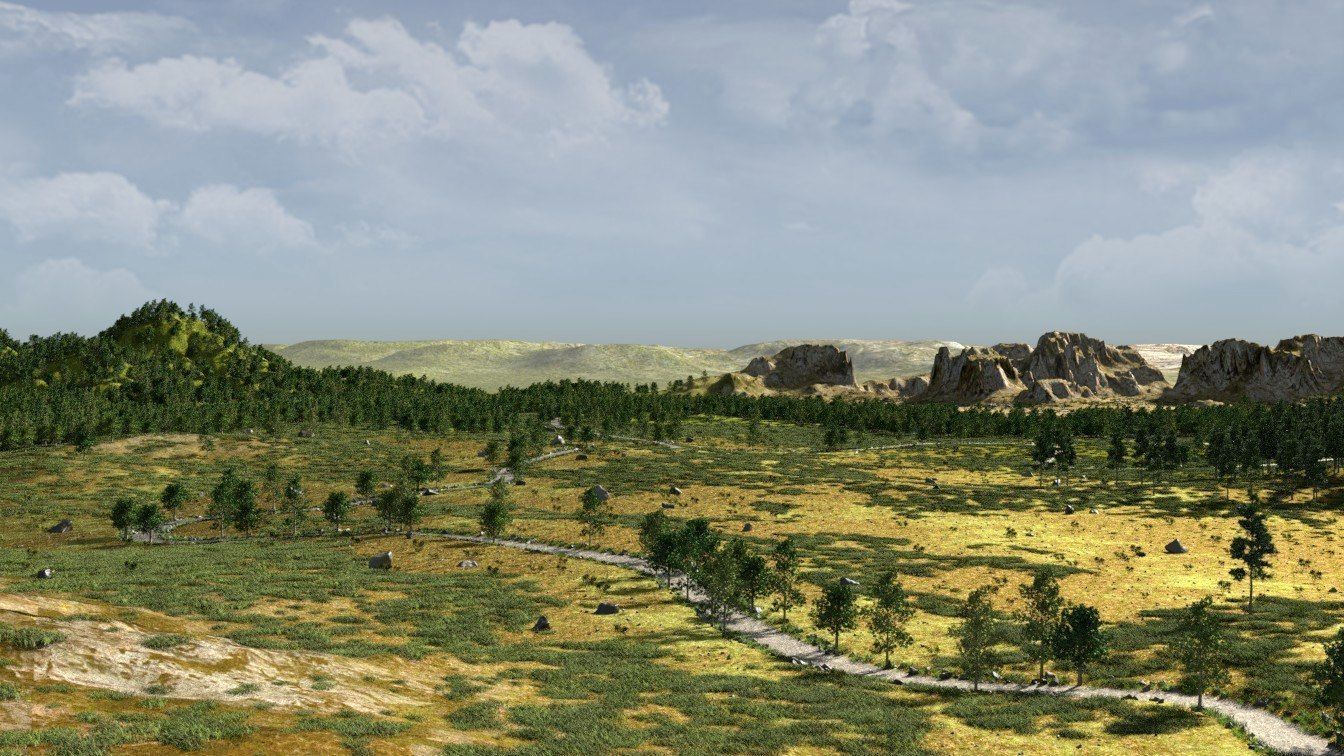 A example of what is possible with a cg landscape from cgtrader user:

The project will feature martial arts aspects not present in the television series.

Like, "Updraftia: Silver and Gold" the music will be classical pieces old enough to be in public domain. They will also feature modern rock instruments. This creates a slow rock beat that is tied in historical senses, but refreshingly active.

Updraftia Studios is also considering a subscription to Artlist which is a music licensing service. In the television series the music for many scenes is low pitched with a rigid choir. This works well for high stakes fantasy.

Here is an Artlist track that uses the same genius.